Posted on December 9, 2019 by LiterateOWL

Trump unleashes yet another maddening scandal as he opens the door to Saudi Arabian interference – Raw Story
— Read on www.rawstory.com/2019/12/trump-unleashes-yet-another-maddening-scandal-as-he-opens-the-door-to-saudi-arabian-interference/

Lewis: It’s not a deep state, it’s a shallow state. My take away…

The capacity of government public services has been gutted. It’s not as simple as reducing bureaucracy but evaluating what civil servants actually do for people. Michael Lewis’s description of a Coast Guard staffer who solved a better way to save people list at sea, is a marvellous example. Our culture and body politic demonizes civil servants from coast guard and foreign diplomats or weather forecasters to teachers. It is our own folly that we are sliding into an era of ignorance and every man for himself. An unkind and troubling trend in the US and around the globe. Democracy is a multifaceted institution and idea that needs our participation not just a vote. The values we think we embrace are being let go as much as they are being wrenched from our grasp. – Al Smith

enormity of his alleged transgressions works, perversely, to his advantage 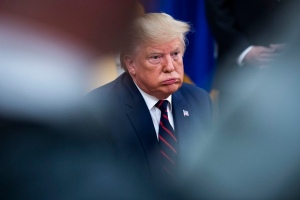 Mr. Trump has destroyed so many norms, has been credibly accused of breaking so many laws and has otherwise engaged in such a dizzying array of possibly impeachable behaviors that any intelligible story line has been blurred, if not obliterated. The enormity of his alleged transgressions works, perversely, to his advantage.-Caroline Fredrickson

A Minnesota judge ruled Wednesday that a former member of the “Miracle on Ice” 1980 U.S. Olympic hockey team, Mark Pavelich, is mentally ill and dangerous, according to Pam Louwagie of the Minnesota Star Tribune.

The judge ordered the 61-year-old committed to a secure treatment facility.

Pavelich faced criminal charges that he beat a friend with a metal pole after accusing him of “spiking his beer.” His friend suffered cracked ribs, a bruised kidney, and a fractured vertebra.

Judge Michael Cuzzo deemed Pavelich incompetent to stand trial based on an expert report, concluding that he was “incapable of participating in the defense due to mental illness or deficiency.” The case was put on hold while the state moved to civilly commit him to treatment.

Pavelich’s family is convinced he suffers from CTE after repeated concussions and blows to the head sustained during his hockey career. They started to see changes over the last few years but he has refused help. CTE can only be diagnosed after death.

A Facebook rumour about white vans is spreading fear across the U.S.

Posted on December 4, 2019 by LiterateOWL

Terrifying rumours initially propelled by Facebook’s algorithms have sparked fears that men driving white vans are kidnapping women all across the United States for sex trafficking and to sell their body parts.
— Read on beta.ctvnews.ca/national/world/2019/12/4/1_4715178.amp.html

Posted on December 3, 2019 by LiterateOWL

Teens from some of China’s wealthiest regions are outperforming their peers in the world’s richest countries in reading, math and science, according to new results from a global education study.
— Read on edition.cnn.com/2019/12/03/asia/pisa-rankings-2019-intl-hnk/index.html

Fewer than one in 10 students surveyed in the OECD countries could “distinguish between fact and opinion, based on implicit cues pertaining to the content or source of the information,” the report said.

Posted on December 3, 2019 by LiterateOWL

The test, which is given every three years, measures a 15-year-old student’s reading, mathematics and science literacy, according to the National Center for Education Statistics. Results showed that, over all, Americans who took the test scored slightly above students from peer nations in reading.

However, American students scored below the middle of the pack in math, and nearly one-fifth of the students who took the test scored so low it seemed some had not mastered the reading skills of someone far younger. American students’ results in reading and math have also been stagnant since 2000, and the achievement gap in reading between high- and low-performing students is widening.

There is no consensus on why Americans have not made much progress, and commenters, including teachers and former educators, shared their opinions on the matter.( NYT)